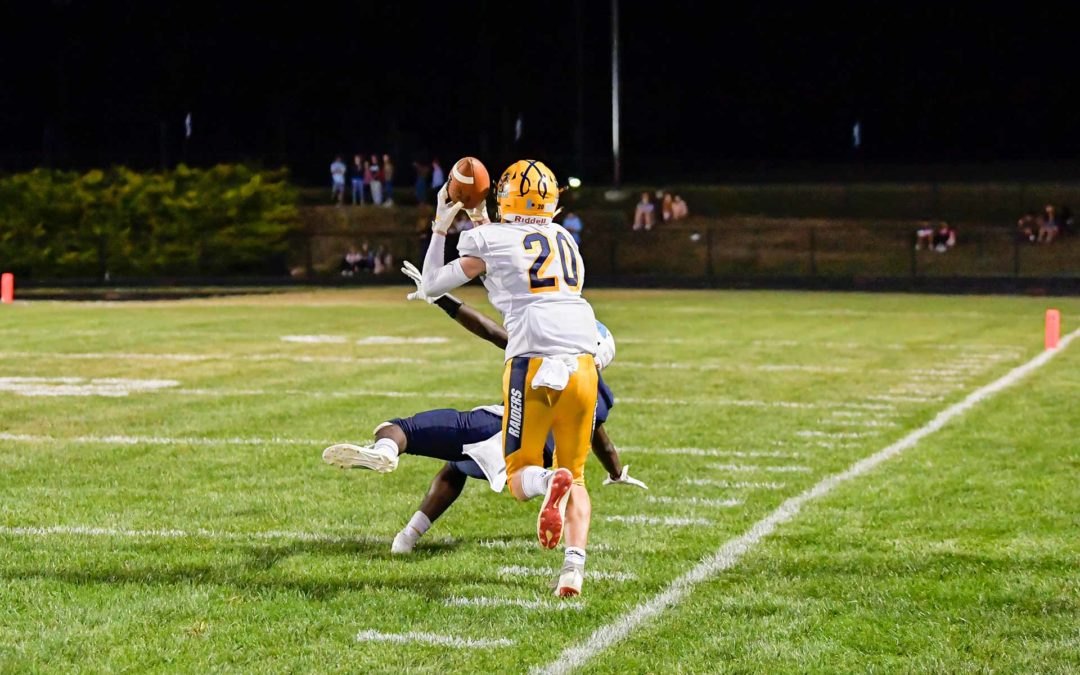 WINCHESTER — Jimmy Kibble has some pretty good kicking genes, and he showed on Friday night that he’s a pretty special all-around athlete as well.

The 6-foot, 170-pound sophomore accounted for all 20 of Loudoun County’s points in the second half to lead the Raiders to a 27-18 comeback win over Millbrook.

Kibble recorded receiving touchdowns of 29 yards and 51 yards, kicked two extra points, and kicked field goals of 25 and 36 yards. Kibble’s 51-yard TD and ensuing extra point put the Raiders (2-0) up for good at 24-18 with 10:09 left, and his 36-yard field goal with 5:34 left to make it 27-18 practically sealed the game given how well the Raiders’ defense played in the second half.

Kibble’s father is former Virginia Tech punter Jimmy Kibble, a three-time All-Big East selection who played on the Hokies’ 1999 team that lost in the national title game. But with nights like Friday’s — Kibble also had two punts totaling 95 yards (47.5 average) and sent three kickoffs into the end zone for touchbacks — Kibble is clearly making a name for itself.

“He’s huge for this team,” said Loudoun County fourth-year head coach Tony Rayburn, the former Handley head coach. “And he played the whole game. We had a safety that was off this week, so he had to play safety, receiver, kicker, punter. He’s a tough kid and a heck of an athlete. He’s huge for us. Huge.”

The performance of Kibble, the quarterback duo of Gavin Pitts and Jacob Wilson and Loudoun County’s defense proved to be too much in the second half on an emotional night for the Pioneers. Millbrook honored Scott Jackson, the father of Pioneer senior wide receiver/cornerback Jordan Jackson, before the game with a moment of silence. Jackson passed away on Tuesday after a six-month battle with stomach cancer.

For the game, Pitts and Wilson combined for 223 total passing and rushing yards and three TDs through the air (they each connected with Kibble once in the second half), and the defense limited Millbrook (1-1) to 129 yards in the second half (75 of which came on the Pioneers’ one TD drive after the break) after giving up 198 yards in the first half.

The Pioneers led 12-7 at halftime with the help of touchdowns runs of 4 and 6 yards by senior running back Gavin Evosirch (24 carries, 181 yards; 5 catches, 59 yards). The extra points after the TDs were both wide left. But the tide turned quickly after halftime.

Senior Noah Lockey returned Patrick Sigler’s squib kickoff to start the second half 38 yards to the Millbrook 29. One play later Wilson (6 of 7 for 66 yards and 2 TDs passing, 70 yards on 9 carries) threw a strike down the middle to Kibble in the end zone to make it 14-12 Raiders just 14 seconds into the half.

“We had good blocking on that play, and [Wilson] had a beautiful throw,” Kibble said.

Loudoun County wasn’t done. On the first play of Millbrook’s next drive, Lokey tipped a slant pass from Kaden Buza (11 of 29 for 129 yards and two interceptions, one rushing TD) into the hands of Lucas McAllister, who returned the ball 15 yards to the Pioneers 7-yard line. Millbrook forced the Raiders to settle for a 25-yard Kibble field goal, but Loudoun County was clearly playing with the energy that Rayburn said he was desperately seeking from his team at halftime.

Evosirch said the Pioneers might have been feeling a little too good about themselves at halftime. Millbrook was playing well enough to have an even bigger lead at the break. But the Pioneers couldn’t convert Aidan Haines’ 14-yard interception return to the Loudoun County 38 in the first quarter, and the Pioneers turned the ball over on downs on fourth-and-10 from the Raider 14 with 36 seconds left in the first half.

“I just feel like we got our heads too high at halftime,” Evosirch said. “We thought they were going to be down. And then they just hit us early in the second half. When you get that kind of momentum, you’re going to take it for the rest of the game.”

Millbrook did its best to take it back, as Aidan Long recovered a fumbled handoff exchange at Millbrook’s own 5 to keep the score 17-12, and Evosirch had a 50-yard run to the Loudoun County 10 on the last play of the third quarter. Buza then scored on a keeper on the first play of the fourth quarter to make it 18-17 Millbrook (Buza’s two-point pass was intercepted).

But Loudoun County answered right back. On third-and-4 from the Raider 49, Pitts — who threw interceptions to end each of the Raiders’ first two series — lofted a long pass down the right sideline to Kibble. Jackson had excellent coverage on the play, but the ball was slightly underthrown and to the sideline, and the taller Kibble was able to adjust a little better than the 5-10 Jackson. Jackson fell down after Kibble grabbed the ball around the Millbrook 20, and Kibble went in untouched the rest of the way.

“It was a good ball, but I didn’t think I’d actually get to it,” Kibble said. “I had to come back and get it and it ended up working out.”

Loudoun County only played Pitts at quarterback in last week’s 31-0 win over Fauquier, but Rayburn said the plan all along was to use Pitts (6-3, 190) and Wilson (5-11, 150), who are different body types but have similar dual-threat skill sets. Wilson just happened to come into the game for the first time after Pitts’ second pick.

“They both play safety, and there’s a chance that one might cramp,” Rayburn said. “We feel good about both of them. We’ll keep playing two quarterbacks unless something changes. I was proud of both of them.”

A quick and aggressive Loudoun County defense that made Buza uncomfortable throughout the second half forced two incompletions and dropped him for a three-yard loss to end Millbrook’s next possession after five plays and forced a punt.

“[In the second half], they moved guys around, and they had a delay in their blitzes,” Evosirch said. “We just have to adjust to that for the next games.”

After taking over at its own 44 after Evosirch’s punt, the Raiders drove to the Millbrook 24 to set up a 41-yard field goal attempt from Kibble. But the Pioneers jumped offsides to make Kibble’s job even easier — Millbrook was offsides five times on a night in which it committed 11 penalties for 89 yards.

Kibble’s longest field goal in a game is 52 yards, but he said having five fewer yards to worry about in a pressure situation helped.

“The people in the stands were yelling and chanting, but you’ve just got to zone that out and make the kick,” Kibble said.

Loudoun County forced a three-and-out and had an interception on Millbrook’s final two drives.

Millbrook coach Josh Haymore said the Pioneers didn’t get the strong all-around performance it needed to defeat a talented team like Loudoun County.

“I thought our kids played hard in the first half. We know what we need to get better at. We just need to execute better.”

The Pioneers have to regroup quickly, because they face another challenging foe next week at Heritage in Leesburg. The Pride defeated 2018 Region 4C semifinalist Kettle Run 14-6 on Friday.

“I told [my teammates] after the game that losses are going to happen, but we don’t want what happened tonight to happen again,” Evosirch said. “I just told them to keep their heads up and move on. This is only the second game, and we’ve got more games to play.”

Rayburn said it took a lot of fortitude for the Raiders to beat Millbrook.

“We knew they were a really good team, and a tough team,” Rayburn said. “We knew they would have energy because of the tough situation [with Jackson], and I don’t think we met their energy to start. But I think the second half, we had some things go our way, we fed off of that, and the coaches did a nice job with a few adjustments. I’m proud of our kids.”

Also for Millbrook, T.J. Spain had an interception at midfield to set up the Pioneers’ first TD.