Ground game pushes Wolverines past Raiders and into region final 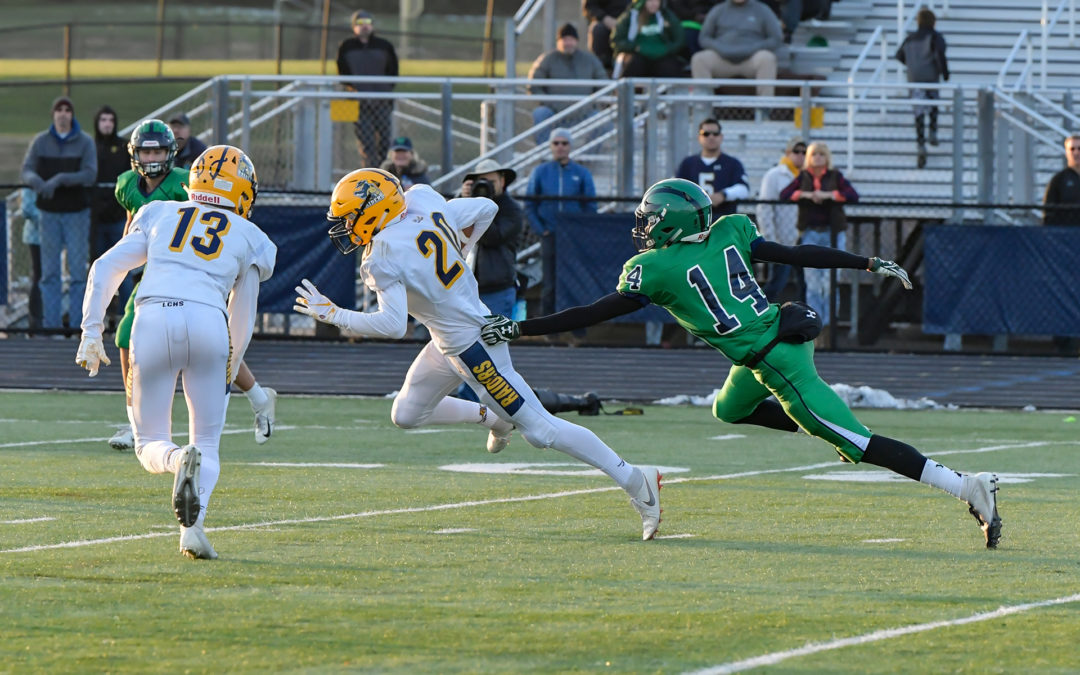 By Jason S. Rufner, Special to the Times-Mirror

The Woodgrove Wolverines built a 22-0 lead halfway through the third quarter and held on for a 28-21 victory over the visiting Loudoun County Raiders in the Region 4C semifinals Saturday afternoon in Purcellville.

The triumph moves the top-seeded Wolverines (8-2) into the region final, hosting No. 2 seed Sherando (10-1). The Raiders’ season concludes at 9-2, with both losses coming to Woodgrove.

“We saw these kids’ character by the way they played this game. Down 22-0 to a great team, and they came back and had some opportunities at the end,” County head coach Tony Rayburn said. “You can’t teach that competitive spirit, so to me that’s what I’m most proud of.”

Much of the second quarter was consumed by Woodgrove’s 99-yard scoring drive, highlighted by senior Nick Lockhart’s leaping snag of a deep pass into the red zone. Lewis then pinballed in from six yards out.

The second half began like the first half. The Wolverines controlled the line of scrimmage, making four first downs to set up Walker’s 10-yard touchdown run. A quick pass to senior back Cameron Beebe converted the two-pointer for a 22-0 advantage.

County didn’t fold. Using the strong arm of senior quarterback Nick Barts and the wideout corps’ speedy legs, the Raiders notched a pair of touchdowns in the last half of the third quarter.

Barts found senior wide receiver Derek McCandless from a yard out to finally dent the scoreboard. About three minutes later, it took one play for Barts to connect with sophomore Tariq Sims, who caught it in stride and sped to paydirt for a 73-yard strike.

It didn’t remain a one-possession margin for long. Walker busted off a 22-yard run, then passed to Lockhart for a 33-yard gain to the 1, from which Walker burrowed into the end zone.

“We had kind of a slow start in the second half, lost energy there for a bit,” said Lockhart, who hauled in four of his six receptions in the second half. “As a team we came together and found a way to power through.”

Forty-five seconds later, the Raiders’ air attack surfaced again. Barts passed over the middle to freshman Jimmy Kibble, who shed a tackler on his way to a 45-yard score. The differential was seven with 11 minutes to play.

Woodgrove killed four of those minutes on its subsequent possession, but produced no points. County, armed with momentum, got the ball back.

It came down to a fourth-and-26 from near midfield. Barts took the shotgun snap, looked deep and threw. Sims was momentarily open, but Hendricks closed fast and knocked the ball from Sims’ waiting hands for the victory-clinching play.

“Loudoun County’s a great team and any time you can beat them twice, it’s big-time,” Walker said. “This is great, but this isn’t our goal. Our goal is a region championship, and after that, we’re trying to go all the way.”