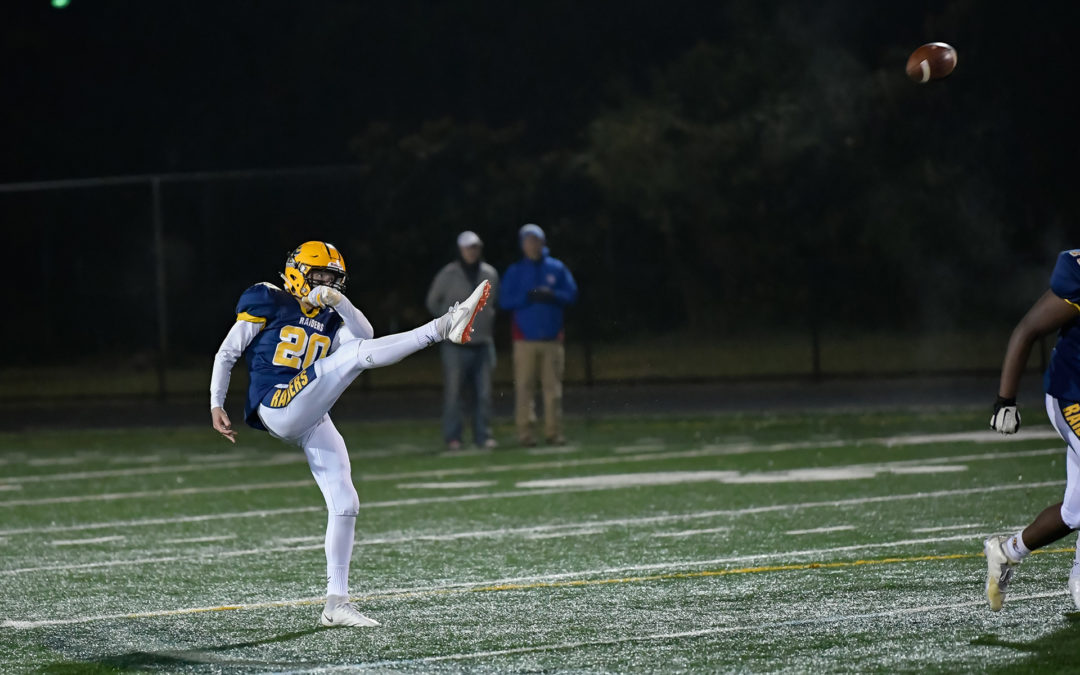 Football and rough weather have always sort of gone hand in hand. Even more, the games that are fraught with difficult conditions sometimes produce the most exciting showdowns.

On Friday evening at Loudoun County High School in Leesburg, fans saw one of those instances as the No. 4 seed Raiders scored 21 unanswered points in the fourth quarter to rally for a 34-27 home win versus the No. 5 seed Riverside Rams in the first round of the Region 4C football playoffs.

For a large part of Friday, rain fell from the sky in Loudoun County. While it did subside prior to kickoff, the precipitation left the field wet and slippery, adding to the fact that it was only about 10 degrees above freezing. The game, originally slated for a 7 p.m. start, was pushed back a half-hour and emerged as a compelling, back-and-forth match-up.

Trailing 27–13 after three quarters, quarterback Nick Barts led Loudoun County to the thrilling win. With two minutes remaining in the fourth quarter, Barts found Tariq Sims from 73 yards out to complete the comeback and send the Raiders to the semifinals.

Loudoun County (9-1) advances to play at No. 1 seed Woodgrove (7-2) in the semifinals. The Wolverines defeated the Raiders 27-6 at home during the regular season.

Playing in their first postseason game in their fourth overall season, the Rams (8-3) controlled play early. Riverside forced three quick turnovers and led 7–0 at the end of the first quarter.

Early in the second quarter, Barts got the Raiders on the board for the first time with a beautiful fade to receiver Derek McCandless from 20 yards out.

From there, the two schools traded touchdowns. Riverside regained the lead on a short touchdown run from Isaiah Bryant before the Raiders answered with another Barts-to-McCandless touchdown connection. The Rams blocked the ensuing extra-point attempt to cling to a 14-13 lead.

Riverside added to its advantage when Trevor Jackson connected with Vince Speroni on a 25-yard touchdown pass. The Rams took a 20-13 lead into halftime.

At this point, it definitely felt like Riverside was in control of the game. And when Ryan McCann took a Barts’ interception to the house midway through the third quarter to put the Rams up 27–13, things were awfully grim for the home team.

With 9:30 to go in regulation, the pair connected on their third touchdown pass of the game to breath life into the home team and their massive student section. Cam Carson converted the extra point to bring the Raiders within 27-20.

Now, with a whole new energy, the Raiders defense started to make plays left and right.

First, Loudoun County forced a three-and-out from Riverside. Then, after a turnover on downs left the Rams pinned deep in their own territory, the Raider defense scored the game-tying touchdown on a recovered fumble by Elias Mattar. Kyle Towne, it should be noted, forced the fumble and also notched a sack on the previous drive.

Finally, after another standup performance from Loudoun County’s defense, Barts hit Sims on the aforementioned 73-yard touchdown to put the Raiders ahead for the first time.

Riverside wasn’t able to move the ball on the ensuing drive and the Raiders completed the improbable comeback.

Jackson finished with one rushing touchdown and one passing touchdown for the Rams, who set a program mark with eight wins in 2018.